Last night FIRECRACKER attended theatre at THE KAZIMIER, the World Premier of The Last Eden, an original science fiction play written by Maria Swisher and directed by Tana Sirois. 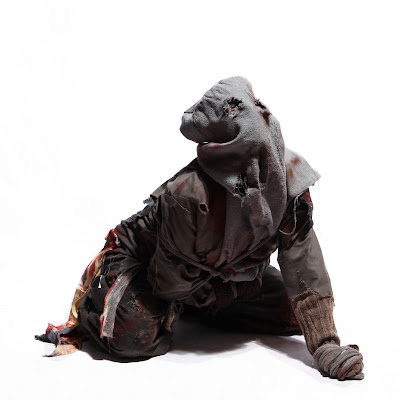 The Last Eden is the story of a young girl, a resident of a harsh concrete dystopian future, who makes the ultimate sacrifice in order to embark on a journey in search of the last place on earth where trees still grow. 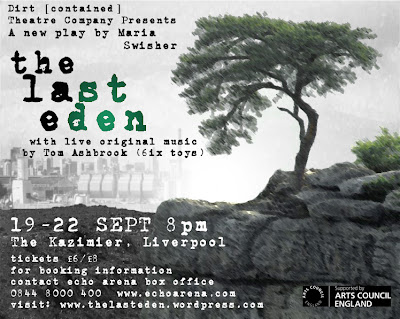 Exploring the notion of man as a storytelling beast, the piece cleverly interweaves live action, multi-media, lighting and bio-mechanical choreography, theatre as it should be raw and passionate.
The imaginative use of space is captivating and the set consisting of pallets and debris transforms The Kazimier. The creative use of costume makes you feel like you are in an Apocalyptic Fashion Show.
CLICK HERE to see pic in detail.

At the core of this ambitious multi sensory experience is an evocative soundscape, a stunning original soundtrack performed (and DJed) live by Thomas Ashbrook; whose band 6ix Toys headlined this August to 20,000 spectators at the Liver Building’s 100th Anniversary concert at the Albert Dock, Liverpool.
Playwright Maria Swisher said:
“Eden is a show about storytelling, that’s what we’re interested in. Creating new ways to tell stories with sound, music, movement, words, and image. Audiences demand to be stimulated now more than they ever have before. To keep up, we’ve got to be willing to change what we call theatre.”
The Last Eden is a piece of theatre with two goals: Firstly, to create an innovative, multisensory experience which stimulates young audiences to re-define the theatrical event. Secondly, to confront the frightening future that generation faces in the wake of global warming, pollution, and the destruction of the planet.
The play runs: September 19-22nd at The Kazimier, Liverpool.
To book tickets click here. 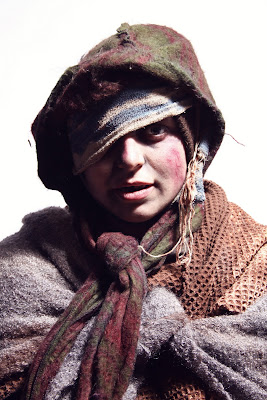 
The Firecracker Studio was ransacked by the cast of The Last Eden, before last night’s performance.
We were privileged to pick the mind of costume designer Miriam Spring Davies.


Miriam graduated in fine art and is a recent L.I.P.A graduate with a passion for fashion, influenced by which is easily identified in the look of the production. She cites her influences as stemming from the world of fashion and particularly Alexander McQueen.
Although the costume designs in the script were very specific, she was allowed the freedom of coming up with her own interpretation and taking on board the ideas from the actors as they found their individual characters.
The creation from costume sketches to construction was a hands on affair. The whole ensemble, even the lighting designer got involved, as they all had to be completed in just four weeks.
The materials were sourced from recycled materials and this make do and mend attitude was in keeping with the plays theme, focusing on the environment.
Miriam and all involved with the process have succeeded in creating an
Androgynous Apocalyptic Nightmare.
A dystopian world imaginatively brought to the stage but one that could be soon so so familiar.
at 9/20/2011 09:12:00 pm